January 13, 2018
Last Sunday I went nearby wetland to photograph lesser whistling duck with my Nikon 300 mm F4 IF ED lens. Firstly I thought it is going to tough to get a single shoot of those ducks because they were in the middle of the pond. I simply underestimated the of maximum zoom range (300mm) of the lens. Although at the end of the day I got some nice shoot. NIKON 300mm F4 IF ED LENS works superb in the cold morning light. Despite mist in the air it gave sharp images.As all respected wildlife photographers says this lens works as per pro.Due to fix focal feature this lens focuses very fast. Birds in flight is one of my favorite and I got some nice birds-flying images. Experts are starting their reviews with build quality of a lens. But as an armature wildlife photographer I always prefer  auto-focus accuracy and good background rendering capability of a lens. On both occasion My Nikon 300 F4 passed with distinction comparing nikon 200-500mm F5.6 vr. Yes I have to admit that due to non vr lens…
Post a comment
Read more 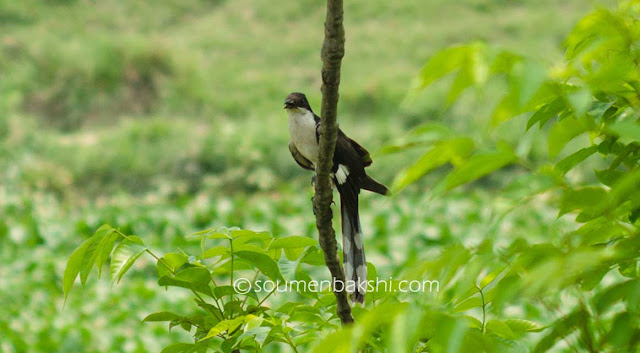 It is great to watch the Jacobin Cuckoo after a long time.I take few shoots  when it perched on a bunch of a tree nearby a pond. It belongs from cuculidae family and are commonly found in Africa and Asian subcontinent. Usually they starts move towards India during the month of April.I found saw them 24th of may at Old Malda, West Bengal, India. Hear is one image of Jacobin Cuckoo.

They are medium in size, black color  and white breasted with a long tail. There are roundish light white color on it's black long tail. Jacobin love to feed little insects and fruits.Locally it known as Bengal chatak.

I was very lucky on that day when I watch  numbers of Jacobin cuckoo. But four of them flew away from me. Only one perched on a small tree beside the pond, where I waited to shoot  pied kingfisher in action.Personally I love Kingfisher most among birds.But I respect all species.Jacobin can fly fast because of their perfect wigs span as per body & long tail.